With the Olympics underway it’s time again for me to get my fix on sports I love but which don’t appear on the teev too often outside Olympics & Commonwealth Games.

But I’m finding myself still distilling the opening ceremony (which, in the opinion of this history & arts loving Anglophile, was awesome) and the team uniforms. Ah, team uniforms – the thing that more people have opinions about than anything else and it’s the thing that many still get so very wrong. This year’s were again a mixed bag, and I know that my bag is probably very different from the next person. Maybe that’s why teams struggle – there’s simply no way to please everyone.

For what it’s worth, here’s my pick of the good, bad & undecided of team uniforms. Feel free to disagree – if you saw some of the stuff I wear you’d probably question that I have any authority here!

United States
I know that many ranked them among the best for their Ralph Lauren prep fest, and yes it was a classic all-American look and the suiting was superbly done, but to me they looked like they were off to sell girl scout cookies on the Love Boat. Or bringing forth a nation of Thurston Howell III’s. And berets? Lebron James in a beret? Man, if he can’t sell ’em, you know it’s wrong.

Australia
A win for the Dunlop Volleys! I had them in almost every colour growing up but the green & gold trim were always my fave. Love, love, love the lining of the blazer. Ok you couldn’t see it in the opening ceremony but to include the names of all previous Australian Olympic gold medallists on the lining was a beautiful idea (Well done Sportscraft). But the outfits weren’t what you’d call fashion forward. In fact they had a touch of the lawn bowls about them – but we’re a nation that loves cheap drinks at the bowlo and made barefoot bowls cool(ish). Celebrate it I say!

Great Britain
Team GB by Stella McCartney – tracksuits with gold lame highlights. Chavtastic! Sure they could have gone traditional buttoned up English suiting and killed it – Stella is a master at suiting after all – but they opted to change it up. Step away from the stuffy and inject a little street. Some thought it was all too Ali G – I thought that was what made it work. A nation of shell suit lovers embracing their inner (or outer) chav. (See lawn bowls & Australia above).

Germany
Blue for boys, pink for girls. And pastel. Ugh.

Jamaica
How to make green & gold work in a modern way to awesome effect (take note Australia, Brazil, Sth Africa etc). I know it’s a tricky colour combination, but it can be done. Of course it helps when you’ve got Usain Bolt working his swagger out front.

Czech Republic
I applaud what I think was an attempt at a whimsical nod to their hosts with wellies & brollys for all, but no. Just…no.

Initially I thought ‘no way’. Rugby shirts? Grey trousers and skirts? But the more I saw of it, they couldn’t have looked more like Sweden if they tried. Relaxed style and in bright, friendly colours (of their flag). At least 90% blonde & tanned. 100% Sweden. 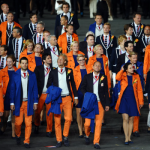 Netherlands
Made another very tricky colour scheme (orange & blue) work in a major way. Usually you can spot the Dutch a mile off because of the festival of orange that surrounds them, but this was stylin’. Possibly the best of the bunch.

There were other shockers and others who got it right (the Italians & French were suitably stylish – as one would expect), but the ones above are the ones that prompted the most immediate reaction for me, and have stayed in my brain – for better or worse – since.

Did I miss anything so ugly it warrants a mention? Let me know.

Don't be shy, I'd love to hear from you. Cancel reply